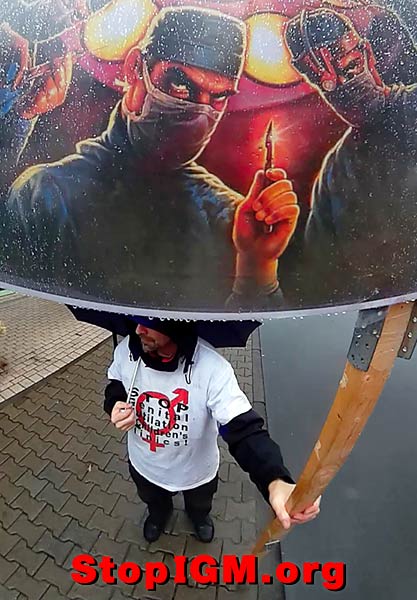 On 4 January 2015 the UN Committee for the Rights of the Child considered non-consensual, unnecessary genital surgey and other medical treatments on children with variations of sex anatomy as a “harmful practice” (same as e.g. FGM or forced marriage), and on 14 August the UN Committee against Torture considered IGM Practices as “Cruel, Inhuman or Degrading Treatment (CIDT).” Even in U.S. law discourse, the crimes against intersex children are starting to be called “Genital Mutilation”.

Nonetheless, the perpetrators around the globe just continue mutilating intersex children – and even boast about it in public and in the media.

In a recent >>> article at 5280.com, the SOAR Clinic (“Sex Development Outcomes – Achieving Results”) flogs a typical PR article claiming how very much different intersex genitalia, erm, people are handled at Children’s Hospital Colorado as compared to “three decades [ago]”, plus boasting of its newly instated, alleged “Support groups for patients, parents and siblings.”

While the article does its very best to popularise these claims of “everything is different now”, evidence to the contrary still shows in the cracks – as long as one looks close enough, and is familiar with the usual mutilators’ “white lies” and “excuses” in order to be able to see through them. For example, the article states:

In fact, most children—with or without DSDs—don’t identify as male or female until they’re about two or three years old. For that reason, with inconclusive DSD cases the SOAR team asks parents to consider waiting on surgery that would cosmetically alter a child’s genitals until the child can make the decision. A few decades ago, doctors were quick to perform surgeries that altered babies’ genitalia if their body parts were considered abnormal; this led to a generation of men and women who were incorrectly raised as the opposite gender. “In an ideal world, we wouldn’t give the baby a gender and would let the child figure it out when he or she gets older,” Travers says. “But our society isn’t ready for that. Instead, we try to make the best decision. Then we encourage the families to have an open mind because we may not get it right.”

There, collected in one paragraph, we have already three of the more popular mutilator’s fallacies aimed at confusing the less informed public:

1.  Genital mutilation is only really wrong, when it cuts the children to the “wrong gender”. – Fact: IGM is always wrong, because it’s non-consensual, unnecessary surgeries and other irreversible treatments leading to e.g. loss of sexual sensation, sterility and lifelong severe pain and trauma.

2.  As long as society is not “ready” to abolish gender in birth certificates etc., genital mutilations are necessary and the “natural way”. – Fact: IGM is always wrong, because it clearly violates the children’s rights to bodily integrity, self-determination and autonomy – or would the same doctors seriously argue, that FGM in Africa would be A-OK and the way to go, until e.g. “patriarchy and cultural beliefs calling for FGM are abolished first”?! (Btw. ISNA debugged the mutilators’ fallacy, genital mutilations could be justified by “having to assign a sex” decades ago.)

3.  Today, we don’t do genital mutilations anymore. – Fact: IGM persists at Children’s Hospital Colorado in the overwhelming majority, if not virtually all cases, as the doctors admit themselves (albeit thinly veiled) when claiming, “with inconclusive DSD cases the SOAR team asks parents to consider waiting on surgery that would cosmetically alter a child’s genitals until the child can make the decision”: Though the article doesn’t spell it out, the really “inconclusive cases” (in the eyes of the doctors, any more enlightened person might note “clonclusively intersex”) are only very few, comparable to the earlier medical distinction of the very few “true hermaphrodites” vs. the overwhelming majority of “pseudo hermaphrodites”. So, if only in the “inconclusive DSD cases” parents are “[asked] to consider waiting on surgery” , the hospital in fact advocates infant genital mutilation from the very beginning in almost any and every “case”. What’s more, since the article states in the same paragraph, “most children—with or without DSDs—don’t identify as male or female until they’re about two or three years old,” this clearly indicates that, according to the Children’s Hospital Colorado, at three years latest, parents can stop “waiting on surgery” anyway – again without even the slightest consideration for the gross violation of the children’s rights to bodily integrity, self-determination and autonomy. Fittingly, the paediatric urology surgery unit in combination with the gynaecology surgery unit at “SOAR” offer unnecessary and mutilating surgery on virtually any intersex diagnosis, including “Ambiguous genitalia, Androgen insensitivity syndrome (AIS) , Congenital adrenal hyperplasia, Clitoromegaly, Hypospadias” (Urology) and “Absent vagina, External or internal genital anomalies, Disorders of sexual [sic!] development” (Pediatric and Adolescent Gynecology).

While the SOAR clinic at Children’s Hospital Colorado has to be commended for listing and linking at least some (mostly parents-lead) independent Peer Support Groups on their homepage, unfortunately all such embellishments and sweet-talking won’t change the persisting basic injustice:

Only if their parents vehemently refuse having unnecessary and harmful “genital corrections” done on them by unethical and irresponsible pedo doctors, intersex children will have at least a fighting chance of growing up without suffering genital mutilations – also at SOAR in Colorado.

IGM practices are a crime – perpetrators must be punished, survivors allowed access to redress and justice!

In the next installments, we’ll be looking at the current harmful practice at UCSF CA, UCLA CA, the Albany Medical College NY, …

>>> Intersex Surgeon: “Only Fear of the Judge Will Make My Collegues Change”
>>> UN Committee Against Torture (CAT) Condemns Intersex Genital Mutilations
>>> UN Committee of the Rights of the Child (CRC) Declares IGM a Harmful Practice