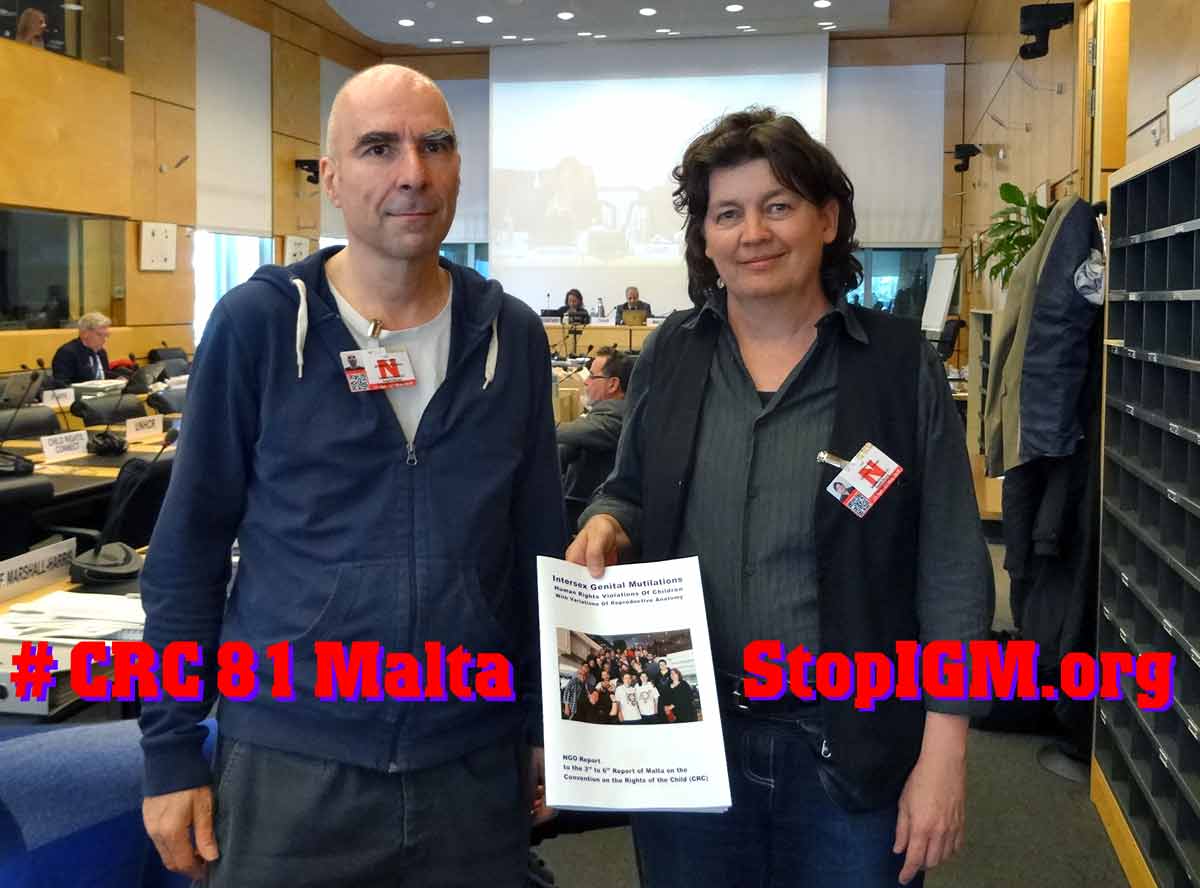 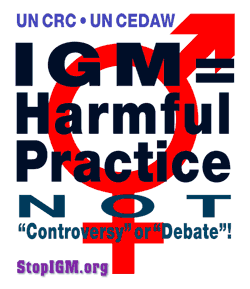 As a result, CRC has now reprimanded Malta for IGM practices.

StopIGM.org welcomes this clear verdict, and in particular that CRC explicitly obliged Malta to

‘For far too long and by far too many, Malta has been uncritically heralded as a “promised land” for intersex children, without ever taking a hard look at the less savoury reality behind the well-sounding promises and claims of Maltese officials. Fortunately the UN Committee on the Rights of the Child refused to have the wool pulled over its eyes, but finally made clear that, when it comes to harmful practices, mere legislation alone is not enough – and even less legislation marred by serious gaps and loopholes, which in practice isn’t enforced. Intersex children deserve better!

As stipulated in the CEDAW-CRC Joint General Comment invoked by the Committee, Malta urgently needs to implement a “holistic framework” to ensure “data collection”, “monitoring” and “enforcement” of the law, as well as that “children subjected to harmful practices have equal access to justice, including by addressing legal and practical barriers to initiating legal proceedings, such as the limitation period, and that the perpetrators and those who aid or condone such practices are held accountable”.

It sickens me to see how Maltese officials continue to condone, trivialise, advocate, facilitate and even personally perpetrate intersex genital mutilation with impunity, while at the same time masquerading as intersex champions, even at the UN. Everyone who condones or even supports such behaviour instead of challenging it loud and clear is just as guilty as those who wield the scalpel.’

28. While welcoming the State party’s efforts to eliminate harmful practices against children, including the amendment to article 251 of the Criminal Code that criminalizes female genital mutilation, forced sterilization and forced marriage, and the adoption of the Gender Identity, Gender Expression and Sex Characteristics Act that provides for the recognition of gender identity on person’s self-identification rather than harmful medical and surgical requirements, the Committee remains concerned that:

(b) There are cases of intersex children allegedly subjected to surgical and other procedures, which were medically unnecessary, without their consent to such procedures, which often entail irreversible consequences and can cause severe physical and psychological suffering; and the lack of redress and compensation in such cases.

(d) Ensure that intersex children are not subjected to unnecessary medical or surgical procedures during infancy or childhood, and guarantee the bodily integrity, autonomy and self-determination of the children concerned, and provide families with intersex children with adequate counselling and support;

(e) Effectively investigate incidents of surgical and other medical treatment of intersex children without informed consent and provide redress to victims of such treatment, including adequate compensation and rehabilitation.’

A NGO report by StopIGM.org to the UN Committee on the Rights of the Child (CRC) demonstrates that in Malta the penalties for IGM are still less than half of those for FGM, and that in relation to IGM the law also contains other known loopholes, with the result that that intersex genital mutilation continues unchanged, both domestically in university children’s clinics, including the Mater Dei Hospital, and abroad in contractual clinics, notably in the UK, Belgium and Italy. (The government still does not disclose any figures on this subject.)

In contrast to the Maltese prohibition of FGM, there is still no extraterritorial protection against genital mutilation on intersex children in Malta (i.e. IGM abroad continues with impunity), also incitement, financing, aiding and abetting, etc. are still allowed to continue with impunity when it comes to IGM, even domestically. Accordingly, the law is ignored or not enforced in Maltese clinics – with the tacit approval of the Maltese government, whose Minister of Health is not only a well-known advocate of IGM, but as a paediatric surgeon also a hands-on IGM practitioner.

During its 81st session in Geneva, the UN Committee on the Rights of the Child, based on our NGO report, questioned Malta about IGM practices and the actual implementation of the law concerning Intersex children (see video + transcript). The Maltese delegation ‘replied’ on ‘intersex and trans children’ and ‘LGBTIQ issues’, claimed there were ‘no cases of unnecessary medical or surgical interventions’, neither ‘locally’ nor ‘abroad’, and promised to convene yet another ‘interministerial committee who will be following up the implementation of the law more closely’ (see video + transcript). (In a personal conversation a delegate confirmed that the most common form IGM 1 ‘hypospadias repair’ is practised unchanged in Malta, ‘but that’s not Intersex’).

On the day of the State Examination in Geneva, the Times of Malta reported on our NGO report and the evidence documented therein that in Malta – despite all appearances – intersex children are still victims of genital mutilation. Remarkable are also the the comments below the article, including a telling one by someone apparently at least close to IGM doctors, complaining that “[…] hypospadias repair surgery is done by fully qualified health care professionals […] I find it offensive to label such surgery as IGM. […] Parents also have a duty of care towards their children and should not be made to feel guilty if they seek a medical opinions and treatment.” (JK Scicluna on May 15, 2019 8:42 PM) – however, most comments are opposing IGM.

Eventually, a week after concluding the 81st session, the Committee now published its Concluding Observations – including a reprimand to Malta for IGM practices, and binding recommendations on how to effectively protect intersex children not just on paper, but also in practice, marking the very first UN reprimand for IGM to Malta, the 14th European country reprimanded for IGM, and already the 42nd UN Treaty body reprimands condemning intersex genital mutilations as a serious violation of non-derogable human rights.