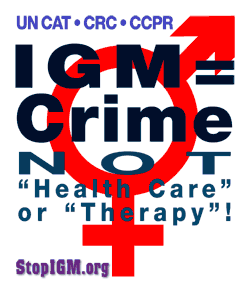 During its 72nd Session in Geneva, the UN Committee on the Elimination of Discrimination against Women (CEDAW) questioned the UK over Intersex Genital Mutilations (IGM), with the Head of Delegation basically repeating the same (non-)answer no less than 3 times (this blog reported).

The first intersex Q&A was also summarised in the UN press release of the UK’s review:

“Committee on the Elimination of Discrimination against Women reviews the situation of women’s rights in the United Kingdom”
>>> UN Press Release (26.02.2019)

Questions by the Committee Experts

[…] The delegation was asked whether it would adopt legislation prohibiting irreversible surgery on intersex children and remove barriers to access to justice, including by lifting the statute of limitations.

Responses by the Delegation

Responding, the delegation said that England had issued a call for evidence in order to increase its understanding of the issues facing intersex persons and especially victims of intersex genital mutilation. […]

IGM in the UK: 2018 CEDAW Report
Human Rights Violations Of Children With Variations Of Reprod. Anatomy
IGM in the UK • Statistics • Complicity of the State • Harmful Practice
>>> Download as PDF (679 kb)

IGM in the UK: 2019 Follow-Up Report (for Session)
Human Rights Violations Of Children With Variations Of Reprod. Anatomy
Impunity • International IGM Networks in the UK • Testimonies
>>> Download as PDF (430 kb)