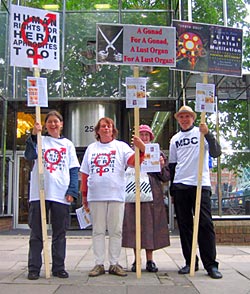 As survivors of non-consensual childhood surgeries, as well as persons concerned grateful for having escaped such surgeries, we are very saddened and concerned about how, as far as we can see, an overwhelming majority of the speakers and Chairpersons at the ‘IV World Congress on Hypospadias and Disorders of Sex Development hosted by the International Society for Hypospadias and DSD (ISHID)’ seems to refuse to listen to their former patients, and instead continue to advocate and perform medically unnecessary cosmetic genital surgeries on children no matter what the consequences for these children. We deeply regret that the Royal College of Surgeons of England, the Great Ormond Street Hospital for Children and the University College Hospital Education Centre take part in such a questionable endeavour, including the infamous ‘live surgeries’.   >>> continued