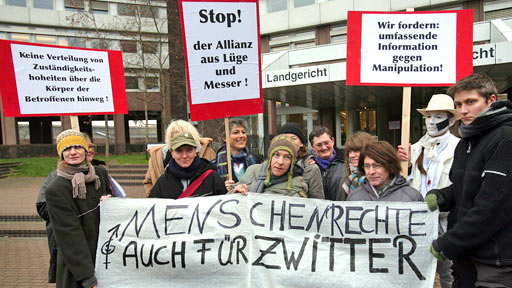 Intersex Genital Mutilations (IGM) are a fundamental human rights violation – see you where the action is!

On Thursday, 26 February 2015 the Nuremberg Court – yes, the Nuremberg Court! – will witness a piece of Intersex History, when the case of Michaela “Micha” Raab vs. her former surgeon and his University Clinic will finally kick off after years of stalling and back and forth.

Micha is only the second survivor of IGM worldwide to succeed in suing her mutilator, and the first in Germany to succeed in suing also the University Clinic facilitating the deed; and her case is only the third case reaching a court at all (after Christiane Völling and the still ongoing #justice4MC case) – a stark testament to the factual impunity of IGM doctors, clinics and other responsible bodies and persons, which has been criticised by survivors, the Swiss Ethics Commission (NEK-CNE) and several UN Bodies, including the Committee against Torture (CAT), already in 2011 explicitly calling on Germany to “Undertake investigation of incidents of surgical and other medical treatment of intersex people without effective consent and adopt legal provisions in order to provide redress to the victims of such treatment, including adequate compensation” (see CRC NGO Report, PDF, p. 28-29).

How much longer?!  Enough with mutilating intersex people with impunity!!!