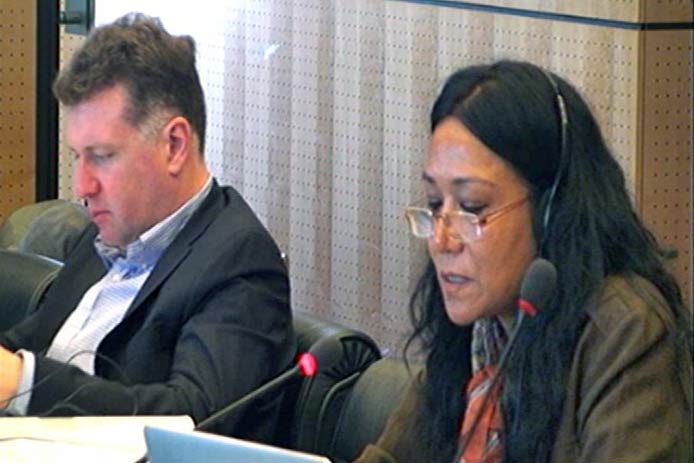 StopIGM.org reporting live from the 55th Session of the UN Committee against Torture (CAT): 7th Periodic review of Switzerland, Mon 3 Aug from 10am, and Tue 4 Aug from 3pm!

A word transcript will follow, after the video recordings become available via http://www.treatybodywebcast.org/category/webcast-archives/cat/.

Tue 17:45 – Follow-up answer on intersex, again by by Mr. Alexis Schmocker, lawyer at the Federal Office of Justice, Directorate of Penal Law and Recourse (DJP), offering some new details, but nothing substantially new.

Tue 17:26 – After a short break, the Swiss delegation now continues with their answers and comments, starting again with the definition of torture and its place in Swiss law.

Tue 16:45 – Rapporteur Sapana Pradhan-Malla (Nepal) is just asking more questions on IGM Practices. She welcomed the Swiss answer and the NEK-CNE report and recommendations, but these would stem from 2012 and now we have 2015. According to the Convention, the State Party is obliged to prevent ill-treatment, and NEK-CNE themselves have criticised the treatment justified by psychosocial indications and called for legal action. How does Switzerland want to ensure the right to bodily integrity and other rights of the persons concerned?

Tue 15:18 – Just now comes the (comparatively short) answer on intersex, given by Mr. Alexis Schmocker, lawyer at the Federal Office of Justice, Directorate of Penal Law and Recourse (DJP):

After 3 parliamentry interventions [in 2011], the Gov is now sensitive of the problem, and has ordered the Swiss National Advisory Commission on Biomedical Ethics (NEK-CNE) to investigate, and issue a report and recommendations, wich were published in November 2012, and contained 13 [sic!] recommendations [in fact there were 14 recommendations, NOT 13!]. The Federal Gov is now examining these recommendations and will discuss measures by the end of 2015 or in the beginning of 2016.

My 2 cents: Not only have the responsible politicians obviously not even properly read the ground-breaking NEK-CNE report yet (how difficult is it to count to 14?!), but without powerful ‘incentives’ they’ll obviously would like to just keep it that way! Notably, also the mentioned 3 parliamentary interventions were the result of a 4-year campaign by intersex NGOs. Hopefully, the Committee will issue strong recommendations to ‘invite’ the Swiss Gov to finally get active!

Tue 14:59 – Today’s 2nd session will see the answers of the Swiss delegation to the questions of the Committee during yesterday’s session.  The online-transmission on http://www.treatybodywebcast.org/treaty-body-webcast-ii/ is now online!

Mon 11:03 – The online-transmission on http://www.treatybodywebcast.org/treaty-body-webcast-ii/ is (after initial technical problems) now live!

Mon 11:15 – Rapporteur Sapana Pradhan-Malla (Nepal) just addressed IGM Practices! She explictly mentioned “harmful practices taking place regardng intersex”, and further mentioned (and quoted) from the 2011 CAT recommendations, the 2013 report of the Special Rapporteur on Torture (extensively), the 2009 CEDAW recommendations, and the 2015 CRC recommendations (again extensively, including “caus[ing] severe physical and psychological suffering”). And then asked the delegation explicitly about “any mesaures taken in this regard?” YAY!!! The Answers of the Swiss delegation are expected for tomorrow.