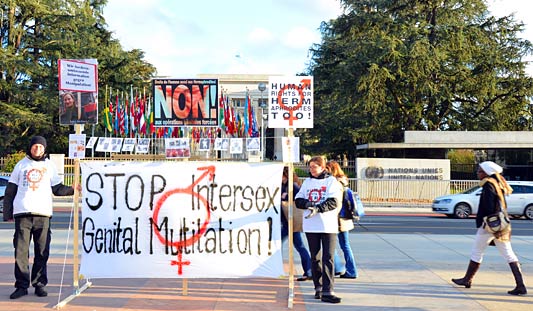 Friday 13 May: A sign of hope for intersex children everywhere – and yet another stern warning for IGM perpetrators and complicit states? Keep your fingers crossed!

All UN Member States have to submit regularly to a “Universal Periodic Review (UPR)” of their human rights records, reported by a “troika” of their peers and considered by the UN Human Rights Council (HRC), who then adopts binding recommendations.

Despite that human rights violations of intersex people have been reported to the HRC since at least 2012, so far the HRC never specifically discussed intersex human rights concerns, let alone issued recommendations to stop IGM practices.

Most welcome therefore the news (thx ILGA) from the ongoing 25th session of the UPR Working Group where Israel went on record addressing IGM practices in its Statement regarding Ireland (PDF):

“Israel is concerned by the cases of medically unnecessary surgeries and other procedures on intersex children before they were able to provide their informed consent;”

The UN Committee on the Rights of the Child (CRC) has recently reprimanded Ireland over IGM practices, considering them a “harmful practice” (like FGM) and calling on Ireland to “adopt legal provisions in order to provide redress to the victims of such treatment, including adequate compensation.”

Also today Friday 13 May concludes the 57th Session of the UN Committee against Torture (CAT), which knowledgeably questioned France over IGM practices and is hoped to issue strong binding recommendations for France.
France was also recently reprimanded over IGM practices by the Committee on the Rights of the Child (CRC).
UPDATE: UN-CAT reprimanded France over IGM! This marks the 11th reprimand by a UN Treaty Body to State complicit in the continuation of IGM.

The Committee against Torture (CAT) has repeatedly considered Intersex Genital Mutilations as constituting at least inhuman treatment in breach of the Convention against Torture, and since 2011 reprimanded Germany, Switzerland, Austria, Denmark, Hong Kong and France.

The Committee in the Rights of the Child (CRC) considers IGM as violence and a harmful practice (like FGM) and since 2015 reprimanded Switzerland, Chile, France and Ireland.

The Committee on the Rights of Persons with Disabilities (CRPD) also considers IGM as inhuman treatment and reprimanded Germany and Chile.

In all above 10 verdicts, the Committes issued binding recommendations to take legislative action to end the practice and/or to ensure access to redress and justice for IGM survivors.

In addition, the Human Rights Committee (HRCttee) as the governing body of the International Covenant on Civil and Political Rights (CCPR) is currently investigating IGM and called on Switzerland to disclose statistics.