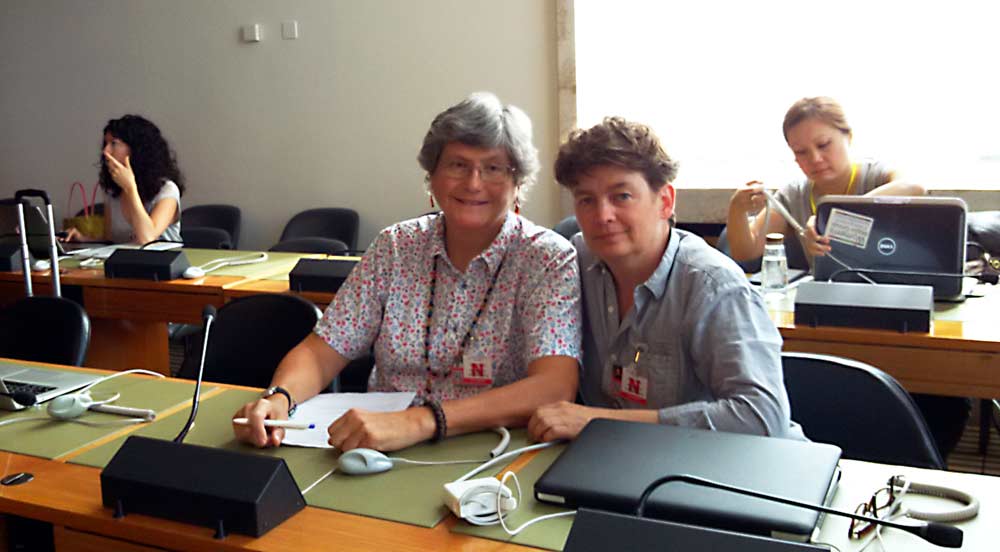 Claudia Balsamo (left), with Daniela Truffer, after testifying to IGM in Italy to the
UN Committee on the Elimination of Discrimination against Women (CEDAW),
Geneva 03.07.2017

At the 67th Session of the UN Committee on the Elimination of Discrimination against Women (CEDAW), before Italy was questioned over Intersex Genital Mutilations, NGOs had the possibility to brief CEDAW (>>> podcast of the entire briefing).

When I was born in 1960, I looked like a girl, but after a year my mother noticed I had atypical genitalia.

Countless exams by different doctors followed. At four they opened my abdomen and found normal testes.

When I was eleven, they removed my testes and cut my clitoris.

Due to the removal of parts of my clitoris and scarring, it’s really hard for me to achieve orgasm.

Since 1985 I tried to obtain my medical records, but I was always refused on grounds of “professional secrecy”.

Only after my father died, in 2007 I found some documents in his desk, but then it was too late, and statutes of limitations had long expired.

To this day, I still see a psychologist to deal with all this, which I have to pay for out of my own pocket.

As shown in our report [1], in Italy all forms of Intersex Genital Mutilation persist, paid for by the state.

These violations have been repeatedly brought to the attention of the State [5], and Italy has already been reprimanded by CRPD [6] for permitting IGM to continue.

Nonetheless, the State party fails to explicitly prohibit by law and adequately sanction or criminalise the practice.