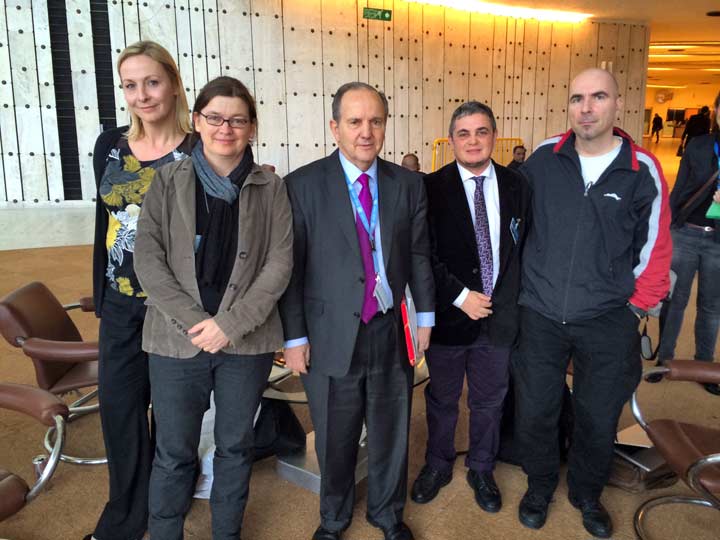 The UN Committee on the Rights of the Child reprimanded the UK + Nepal for facilitating Intersex Genital Mutilations, which the Committee views as a ‘harmful practice’ and ‘violence against children’, obliging both states ‘to explicitly prohibit by law and adequately sanction or criminalize’ IGM practices, and in addition obliging Nepal to combat ‘the high levels of stigma and discrimination faced by intersex children’ particularly in schools. Intersex human rights defenders on the publication of the Committee’s binding ‘Concluding observations’:

‘The Intersex community of Nepal would like to appreciate the recommendation made on 9th of June 2016 by CRC, but now we have to see how the government of Nepal would take it into account as it’s the first time that intersex human rights violations in Nepal are addressed by a UN Committee.’

‘For the first time the Committee considered not only involuntary unnecessary surgery on intersex children as a harmful practice, but also incidents of massive bullying of intersex children in schools, thanks to brave testimonies from Nepal.

It is intolerable how both the UK and the Nepali government, when confronted by the Committee with the lifelong severe pain and suffering caused by intersex genital mutilations, simply tried to shrug off their responsibility by quickly changing the subject to identity and civil registration issues instead. Same goes for the deafening silence of the media in the face of the serious human rights violations of intersex children perpetrated in NHS clinics. While virtually any newly established unisex toilet or civil status policy is counterfactually portrayed around the globe as an alleged ‘breakthrough for intersex’, when it comes to IGM, governments and the media merely look the other way, despite so far 14 reprimands by UN treaty bodies.’

‘We thank the UNCRC for the detailed examination of intersex abuses against children in the UK; and recognising that these and other harmful practices still continue and need to be stop. Intersex children need to be safe guarded and legal protection secured within UK and also the protective characteristic of intersex people should be clearly defined as a protective characteristic. IntersexUK is thankful for the disclosure of fact from numerous intersex individuals who bravely articulated their lived intersex treatment and experiences which formed part of the report.

We are thankful that it has been uncovered that such practices are not historic, but are current within the NHS, and this leads to an urgent need for cross party action. The NHS treatment of intersex children includes genital mutilations, gonadectomies and other harmful practice without the fully informed consent of the person.

We welcome the denouncement of genital mutilations on healthy intersex children as a crime. We welcome and value the recommendations from the CRC especially in acknowledging that FGM and IGM are fundamentally one and the same. We commit to working with cross party representatives on these binding conclusions.’

StopIGM.org, IntersexUK, the UK Intersex Association and intersex advocates Leslie Jaye, Esan Regmi and Parsu Ram Rai demand the prohibition of forced genital surgeries on children and adolescents with variations of sex anatomy and ‘Human rights for hermaphrodites too!’