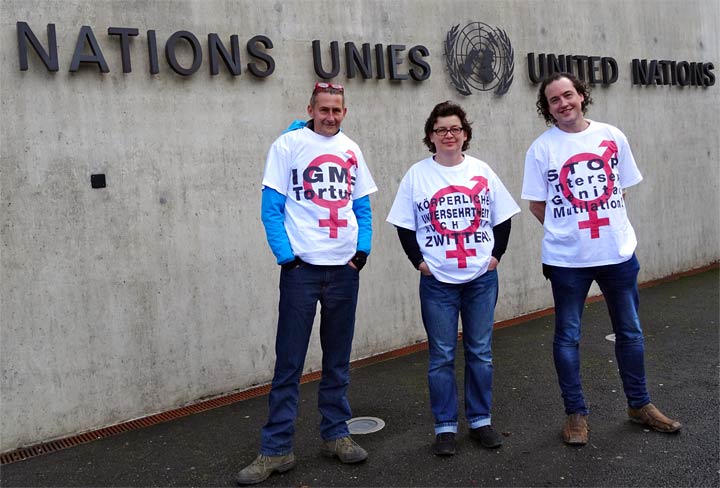 This marks the first time that the Committee reprimanded two States over IGM practices at once, again recognising non-consensual, medically unnecessary, irreversible, cosmetic genital surgeries and other procedures on intersex children as a “harmful practice” and as “violence against children”.

We particularly appreciate that the Committee specifically called on Ireland to “adopt legal provisions in order to provide redress to the victims of such treatment, including adequate compensation”, and for France invoked their Joint General Comment No. 18 (2014) and No. 31 of the Committee on the Elimination of Discrimination against Women on harmful practices, which also contains detailed stipulations regarding legislation and access to justice and redress for survivors, and highlights the necessity of developing a holistic policy.

The fight of intersex people and their organisations for “bodily integrity, autonomy and self-determination” and to eliminate IGM practices is far from over. The CRC’s renewed Concluding Observations however mark an important and most welcome step towards these goals, a sign of hope for intersex children everywhere – and a stern warning for IGM perpetrators and complicit states!

After the Break: The Exact Wording of the Binding Recommendations + Background Info!

The Binding Intersex Recommendations for Ireland:

39.  The Committee notes as positive the adoption of the Gender Recognition Act of 2015 by the State party. However, the Committee remains concerned about cases of medically unnecessary surgeries and other procedures on intersex children before they are able to provide their informed consent, which often entail irreversible consequences and can cause severe physical and psychological suffering, and the lack of redress and compensation in such cases.

40.  The Committee recommends that the State party:

(a)   Ensure that no-one is subjected to unnecessary medical or surgical treatment during infancy or childhood, guarantee bodily integrity, autonomy and self-determination to children concerned, and provide families with intersex children with adequate counselling and support;

(b)   Undertake investigation of incidents of surgical and other medical treatment of intersex children without informed consent and adopt legal provisions in order to provide redress to the victims of such treatment, including adequate compensation; and,

(c)   Educate and train medical and psychological professionals on the range of sexual, and related biological and physical, diversity and on the consequences of unnecessary surgical and other medical interventions for intersex children.

47.  While noting with appreciation the progress made by the State party to eradicate female genital mutilation the Committee is, however, concerned by many young girls still at risk and the possible resurgence of the phenomenon. The Committee is also concerned that medically unnecessary and irreversible surgery and other treatment is routinely performed on intersex children.

(a)    Increase awareness of female genital mutilation in the State party among girls at risk, medical professionals, social workers, the police and gendarme officers, and magistrates;

(b)    Develop and implement a rights-based health care protocol for intersex children, ensuring that children and their parents are appropriately informed of all options, that children are involved, to the largest extent, in decision-making about their treatment and care, and no child is subjected to unnecessary surgery or treatment.

Since 1950, IGM has been practised systematically and on an industrial scale allover the “developed world”, with all typical IGM forms still practised today. Parents and children are misinformed, kept in the dark, sworn to secrecy, kept isolated and denied appropriate support.

For more than 20 years, survivors have criticised IGM practces as harmful and traumatising, as a fundamental human rights violation, as a form of genital mutilation and child sexual abuse, as torture or ill-treatment, and called for legislation to end it and to ensure remedies.

In the past twelve months, the UN Committee on the Rights of the Child (CRC) has repeatedly criticised unnecessary intersex treatments as a Harmful Practice and thus comparable to Female Genital Mutilation, and – in addition to France and Ireland – has so far reprimanded Switzerland and Chile for failing to protect intersex children’s right to bodily integrity and to ensure equal access to remedies and justice for victims.

Similarly, since 2011 the UN Committee against Torture (CAT) recognised IGM practices as constituting at least Inhuman Treatment in violation of the Convention against Torture, and so far reprimanded Germany, Switzerland, Austria, Denmark and Hong Kong. Other UN bodies to condemn IGM include the Human Rights Committee (HRCttee), WHO, UNICEF and the Special Rapporteur on Torture.

States as contracting parties to the Convention on the Rights of the Child, the Convention against Torture and other applicable Covenants including CCPR and CRPD can no longer feign ignorance of the illegal nature of IGM practices, but now must take all appropriate measures including legislation to eliminate them, and to guarantee access to effective redress and justice for all IGM survivors!

The international intersex human rights NGO StopIGM.org demands the prohibition of forced genital surgeries on children and adolescents with Variations of Sex Anatomy and “Human Rights for Hermaphrodites too!”