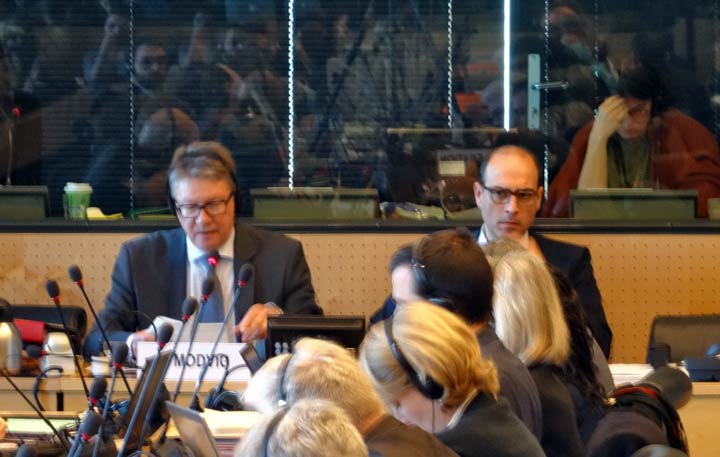 The Session should be archived at treatybodywebcast.org.

StopIGM.org reported LIVE from Palais Wilson, and is currently completing the Unofficial Transcripts and Translations of Intersex Q&As:

18:02h: Chairperson Jens Modvig closes the session. Let’s hope for strong binding recommendations to enact legislation BOTH to prevent IGM practices AND to ensure access to redress and justice for IGM survivors, due Friday 13 May (or soon after)!

18:00h: Closing remarks by the head of the French delegation.

17:51h: Disciplinary measures in prisons … 17:30h: Session resumed. Delegation now talking about statutes of limitations (NOT regarding survivors of IGM of course) … 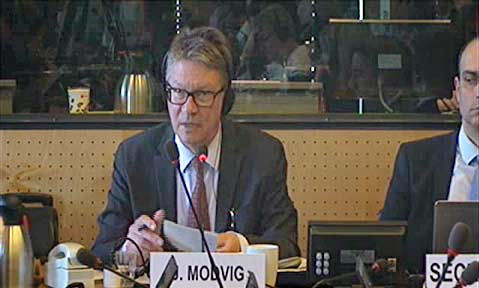 Ca. 16:50h: Chairperson Jens Modvig follows up on intersex children! As a doctor himself, he points out the counselling shouldn’t given by the surgeons convinced of themselves, but by others, including by IGM survivors (peer support). YAY!! 🙂

«The last question I have is regarding the account on treatment of intersex people which is highly appreciated, but I think the worry here is, if those that do the treatment are those that give the counselling. Because you will always have a tendency, and I’m a medical doctor, I know it myself that we think it’s so wonderful what we’re able to do. And this gives a somewhat biased view. And I think the counselling that would be really useful to put in perspective the early surgery would involve much more neutral facilities, even persons who themselves have been subjected to intersex genital mutilation, so that parents and treatment people to a much larger degree could see the long-term impact of the treatment and actually the fact, that we don’t know if it actually adds to quality of life. So I think this is maybe the desired situation, and not only that the surgeons themselves advise the parents. That could be considered a little bit too narrow.» 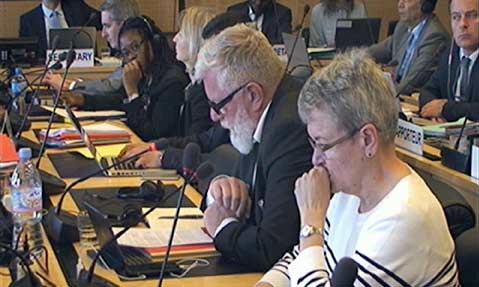 16:28h: Intersex children now up!
Pascal Froudière (Ministry of Social Affairs and Health, Directorate General of Social Cohesion, Delegate – Bureau of European and International Affairs) warmed up the usual excuses – mostly verbatim from earlier proclamations –, claiming IGM practices would not take place in France, but only “therapeutic treatments” allegedly justified by the “best interest of the child”, and best dealt with by “expert doctors” in the infamous “reference centres for rare diseases of sex development” (notable for stubbornly continuing to advocate and perpetrate IGM, as documented in the NGO report (PDF), see p. 10-13). 🙁

The French delegate then promptly changed the subject to “the question of sexual orientation and gender identity”, which – in contrast to involuntary IGM treatments – of course would concern “fundamental rights” and therefore would be tackled as a top priority (a well-known and often-employed diversionary tactic, which Vincent Guillot explicitly criticised during the previous NGO meeting with CAT), while regarding IGM practices, first of all years of “extensive work” and debates would be necessary to first “better understand the problem” (the same diversion strategy also employed by the Frech Gov during the 2016 CRC examination of France). 🙁

(Note: 90% of the French reply was lifted verbatim from a recent Gov statement in the French Senate – in the following translation marked bold.)

It’s a complex subject related to both ethic questions and the rights of the human being, and particularly the rights of the child, the fight against discrimination, and healt issues, also there has to be a holistic approach to the subject.

So, before a therapeutic decision is made, those children need a multi disciplinary care in specialised competence centres, where endocrine and genetic analyses, as well as indispensible imaging methods will be performed, in order to determine the underlying illness, as well as the medical and surgical treatment options.

There is a reference centre in France, the centre for rare diseases of sex development, which includes two facilities, one in Lyon and one at the Hospital Kremlin-Bicêtre near Paris, and it works together with other reference centres for rare endocrine diseases. The close collaboration with a reference centre is essential for the diagnostic approach, the medical treatment and the indication for surgery, early or postponed, and the following care, as well as for the clinical research.

The irreversible nature of some reconstructive surgery demands consideration of the medical findings, in particular the prognostic, as well as of the free choice of the parents and of the child, if it is able to express its will.

Whatever therapeutic treatment options are chosen, a permanent care is necessary to be able to evaluate the physical, sexual and psychological consequences of the treatments.

With such complex medical questions, which entail multiple lifelong consequences, the quality of the medical expertise and care, and of a continuous dialogue are best suited to guarantee compliance with the rights of the child. They must ensure to prevent any premature decisions and any action, which later may be experienced as intolerable mutilation.

Finally, regarding the question of sexual orientation and gender identity, this is familiar problem in Europe, since it raises medical questions, but also questions of fundamental rights. This question is the matter of current activities within the strategy for the rights of the child 2016-2021 and the “SOGI” unit of the Council of Europe, which is in charge of questions regarding sexual orientation and gender identity.

In France there is little information of this phenomenon available, so we need to carry out extensive work to be able to understand it better and to answer to it. That’s why the National [Consultative] Ethics Committee will be tasked, before a position on the topic can be taken. Thank you.

16:22h: Psychiatric institutions now on: isolation, solitary confinement and use of restraints …

16:01h: Now about training of security forces and medical officers (in detention settings).

15:51h: Moving on to vulnerable asylum seekers, and the “migrants in Calais”.

15:06h: The session started now after a short delay (due to the French delegation failing to deliver their copies for the interpreters) and the live transmission is on! The first answers concern prisons.

14:46h: The French delegation just arrived, and today’s session with the much anticipated answers of France to the damning questions by the Committee will start shortly. If everything works out, it will be transmitted live on the web. Anyways we’ll keep you posted here! 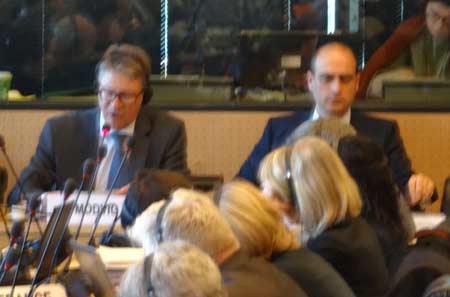 Please inform the Committee whether counselling services and psychological support are provided to intersex children and their parents on an obligatory basis. Does the State Party intend to take any measures to protect the rights of intersex infants and children?» 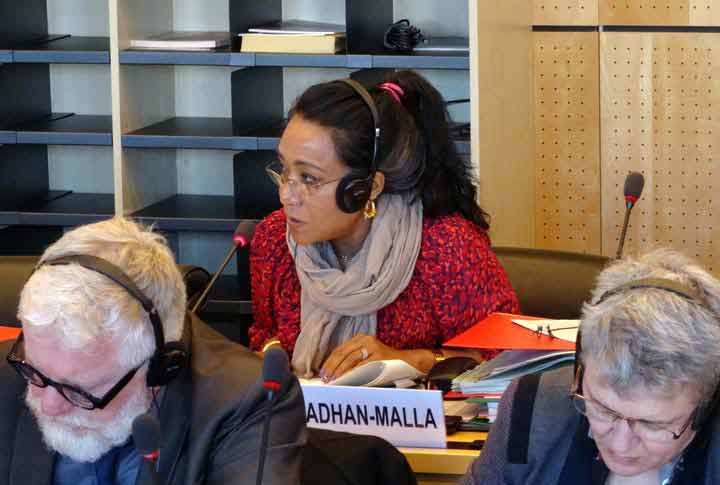 Ca. 11:30h: Committee member Sapana Pradhan-Malla referred to previous criticism by CAT and others continued to ask if France has any plans to to ensure access to redress and justice for IGM survivors! YAY!!!

«My third concern is, we have also received reports regarding the cruel and inhuman treatment of persons with intersex variations in France who are submitted to involuntary masculinising or feminising genital surgeries, sterilising procedures, medical display, and unethical experimentation often during the first years of their life.

Persons concerned witness that such treatments cause lifetime harm and suffering, but such harmful practice is advocated by High Authority of Health paid for by public health insurance and practiced in public university clinics as well.

The Special Rapporteur on Torture as well as our Committee have made many critiques of such practices in many countries and recommended to take all appropriate measures to prevent such practice and also to ensure justice.

And therefore we would like to know, Madame, if your delegation is aware about such human rights violations in your country and if any legislative measures are planned to prevent involuntary treatment and also if you are trying to make any effort to ensure justice to such a human rights violation. Thank you.»

12:59h: Chairperson Jens Modvig concludes today’s 1st Session with France. The replies on intersex by the French delegation are due tomorrow during the 2nd Session, Wed 20. April 15:00-18:00h. To be continued …