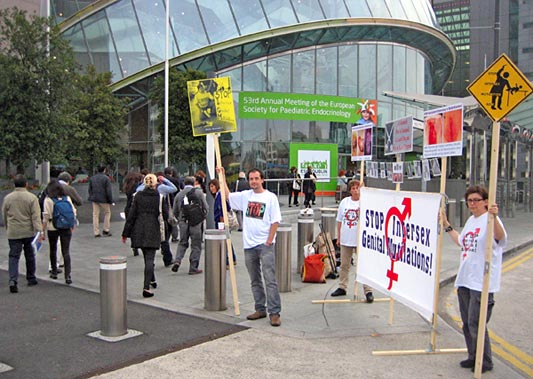 We hardly had put our T-shirts on and were still working on the placards, when already the first visitor of “53rd Annual Meeting of the European Society for Paediatric Endocrinology (ESPE)” gave us a thumbs up, “I’m on your side.” So it’s fair to say that the first intersex protest (of all in all 4 until Saturday) kicked off quite nicely. While of course some of the doctors were less amused to have to get past us to enter the Convention Centre, with facial expressions we’ve come to described as “adequately disturbed”, as per usual there were surprisingly many others openly appreciating our presence, stopping for an open conversation on their way in, and/or taking photos. A reknown surgeon which we’ve already met at another recent protest even affirmed again that it’s good we’re here to make them think. We also learned that later this morning there will be a meeting where a pending revision of the infamous 2006 “D$D Consensus Statement” will be discussed, and for tomorrow – a first! – we got an invitation for a short informal meeting with ESPE representants. And all the while, there are still more signatures coming in for the in the meantime traditional Open Letter to ESPE and Irish D$D Universities and Children’s Clinics (the deadline will be in about 2 hours, so if you hurry, you can still sign up!), with the count now already approaching 70 signatures from all over, including many sympathetic doctors. Later today we’re gonna do another peaceful protest at Trinity College, with 2 all day protests back in front of ESPE to follow on Friday and Saturday! See you where the action is! 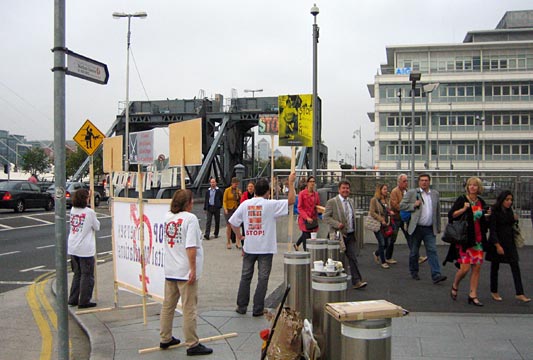