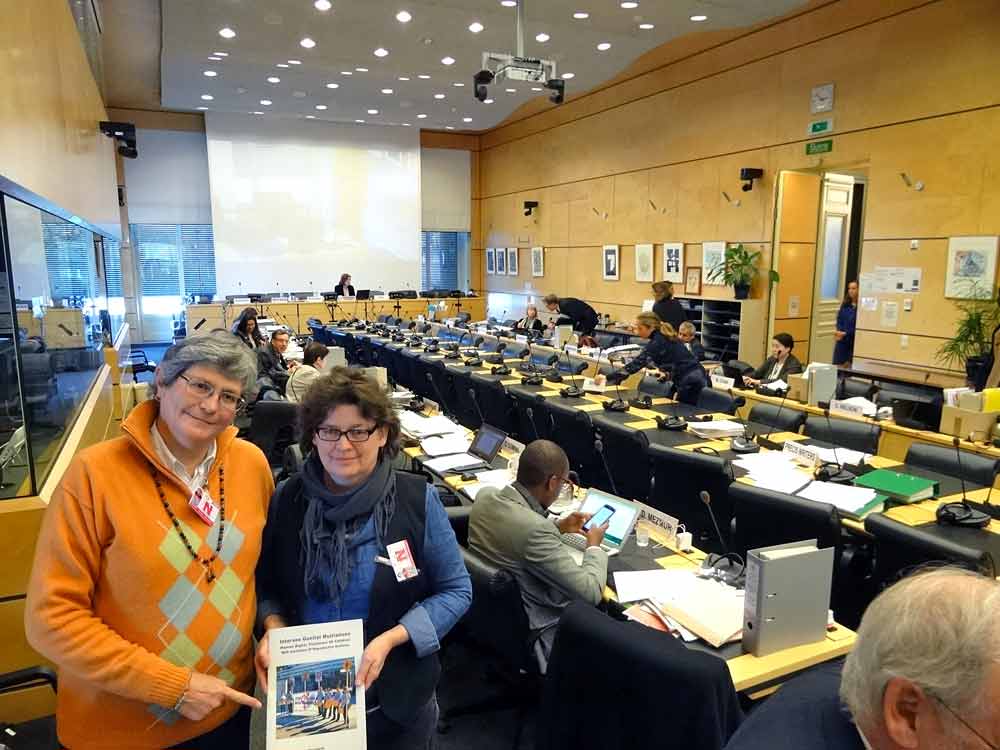 StopIGM.org together with Italian intersex advocate Claudia Balsamo, with the support of Intersexioni and Intersex Esiste, and with additional help from Michela Balocchi and Daniela Crocetti submitted 2 comprehensive NGO Reports on the Situation of Intersex People in Italy to CRC, which demonstrate that intersex genital mutilation practices continue in Italy, and during the Pre-Session on 06.06.2018 briefed the Committee with a Joint intersex Statement (PDF).

During the 80th Session of the Committee on the Rights of the Child (CRC), the Committe is examining the human rights record of Italy on 22-23 January 2019, with both Session being transmitted on webtv.un.org. StopIGM.org is reporting LIVE from Geneva, hoping the Committee will ask tough questions on IGM practices in Italy!

«I shall end, Madam President, with very brief questions in relation to intersex children.
What is the health care protocol for intersex children?
What procedures and steps should health teams follow when an intersex child is born?
Are any of these children undergoing medical or surgical treatment?
What kind of support is planned to provide appropriate counselling and support to families of intersex children?
In relation to this, have incidents of surgical and other medical treatment without informed consent come to our attention, have they carried out an investigation into this? If so, do they have legal provisions in place to provide redress to victims of such treatment?
What training do medical professionals and psychologists receive on the sexual, biological and physical diversity associated with this phenomenon, and on the consequences of unnecessary surgical and other medical interventions for intersex children?»

17:18h: (Video @ 02:18:04)  Prof. Salvatore Sciacchitano, endocrinologist and Head Secretary at the Ministry of Health, non-answers on intersex: While the question was about intersex and IGM, he shortly claimed this would be “therapeutic health care procedures” the quickly changed subject and instead “replied” on Transgender (referring to law 164 of 1982 about changing legal sex) … He also raised environmental pollution causing intersex in the Veneto region.

«I gladly answer the question of the Spanish commission member in my capacity as representative of the ministry of health and […] in my capacity as endocrinologist. The question referred to sexual differentiation disorders. in the health field, the path of surgical and registry attribution of sex is regulated in Italy by law 164 of 1982 [= “Law on Transsexualism”!].

The medical-surgical treatment provided for by law number 164 of 1982 is necessary only if there is a condition of conflict of the so-called ambiguous genitalia. I would like to point out that the Constitutional Court in 1985 sanctioned that sexual identity takes into account not only external sexual characteristics, but also psychological and social elements, resulting in a conception of sex as a complex data of personality determined by a set of factors whose balance must be facilitated or sought by favoring the dominant factor or factors.

Recently, our constitutional court ruled again in october 2015 reaffirming the principle that it remains inevitable a rigorous judicial assessment of the manner in which the change occurred and its definitive character. The court specified that compared to the change of sex, surgical treatment is a possible tool to help achieve a full psychological and physical well-being of the person.

The current legislation governing the declaration of sex at birth dating back to november 2000 is supplemented with a confidential note based on rigorous and complete medical certification of the disease from which the newborn suffers, so as to allow later, if necessary, a correction of the indication of age through a more simplified procedure than that provided for by law.

I would also like to mention that in these days our ministry is engaged together with the Veneto region on a large number of cases recorded in this region of disorders of sexual differentiation in fetuses of mothers subjected to water pollution with perfluoralkylic substances, so called PHAS, resulting from the processing of plastic materials, that have damaged the fetuses especially males of contaminated mothers causing dysfunction of their sexual differentiation. Our ministry of health is therefore also engaged in the front of prevention and research and identification of possible causes of disorders in particular those caused by environmental pollutants. Thank you.»

«I add a single element of updating about the fact that recently we are updating the birth assistance certificate I mentioned before for a new outline that in terms of indication of sex to the unborn child, while today provides male or female and then a description of female and male genitalia, we will replace everything instead with male or female or indeterminate  because the condition at that time is not identifiable, just to take into account the specificity of these cases and accompany them in the definition and in time.»

11:41h: (Video @ 01:41:48) YAY!! Committee expert and Country co-rapporteur Mr. Jorge Cardona Llorens (Spain) follows up on intersex and IGM! Clarifies answer was rather on trans issues, not intersex children. Repeats: What is the current protocol for intersex procedures, who decides?

12:39h: (Video @ 02:39:04) More non-answers on intersex by Prof. Salvatore Sciacchitano, endocrinologist and Head Secretary at the Ministry of Health: Reads out the unrealistically low numbers on “urogenital surgery” from the State report Annex (discussed in the NGO Report for Session, p. 10-12), claims all surgery decisions were only taken after the child has consented.

«Yes, thank you, Salvatore Sciacchitano, Ministry of Health. I answer the questions of the Spanish Commissioner regarding sexual differentiation disorders, saying that reference has been made to the codes of the international classification of diseases, the codes of surgery, as well as data extracted from hospital admissions.

According to the Chicago Consensus Conference of 2006, sexual differentiation disorders have been established to be due to a series of diseases such as Klinefelter syndrome, gonadal dysgenesis, indeterminate sex pseudo-hermaphroditism, sexual chromosome abnormalities, other [incomprehensible] testicular functions, androgenic resistance syndrome or morris syndrome, adrenogenital syndrome.

I refer [incomprehensible] to all the procedures that are always included for the same codes as surgical procedures and appoint urogenital apparatus surgeries, and I stress urogenital, and I will say that in the selection of all that is the case study we received, we used criteria of age between 0 and 17 years, and taking into account the peculiarity of the expression of informed consent of minors in relation to the gradual ability to discern. The third element of data provision was the SDO system. The SDO system consists of the hospital disposal forms referring to the years 2015, 2016 and 2017, where we have separated all the pathologies that referred to subjects between 0 and 17 years, and of these we have made a comparative assessment with other states.

A total of 2017 1252 cases of sexual differentiation disorders were diagnosed, and three cases were surgically treated in 2017. They are a 13-year-old male, a 2-year-old female, and another 16-year-old female. In the decision he chose the surgeon, after hearing the parents, and in the case of a minor with discernment skills was also heard the minor, and therefore we have two who were aged 13 and 16 years.

I repeat the concept, these are urogenital interventions, so in some of these probably the concern was to ensure the function of urination.»

IGM as a Harmful Practice: UN-CRC Briefing
• IGM: A Survivor’s Perspective • Intersex Movement History
• What are Variations of Sex Anatomy?  • What are IGM Practices?
• IGM and Human Rights  • Conclusion: IGM is a Harmful Practice
>>> Download PDF (3.14 MB)     >>> Table of Contents

StopIGM.org is an international human rights NGO of survivors and allies fighting Intersex Genital Mutilation (IGM) in children’s clinics, and for the right to physical integrity and self-determination for all children born with ‘atypical genitalia’, or variations of reproductive anatomy. IGM practices are a serious violation of non-derogable human rights and MUST STOP.