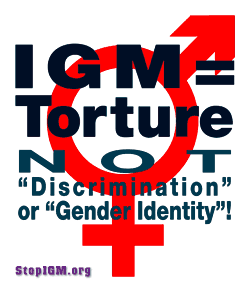 Now, are we missing something here, or is this just another example of the ongoing takeover of the intersex movement by better-funded LGBT organisations – i.e. whenever funding for intersex becomes available, it’s inevitably going NOT to intersex organisations, but to third party LGBT organisations instead, which then in turn use it to patronise, erm, “help” intersex people, of course strictly whithin “gender” and LGBT frameworks only, but with ZERO MONEY at all going to actually combatting IGM practices and confronting IGM perpetrators – and with intersex organisations staying silent, or even welcoming that “now finally something is done for intersex” (no matter how harmful) …

On top, while AGA claims to serve intersex people in the first place (or at leat they list them first), as far as we can see they mainly serve transgender and non-binary people, and intersex people only as far as they’re also non-binary and/or LGBT (which most are not), while again letting IGM doctors continue mutilating intersex children unchallenged …

Does anybody have more info to either confirm or correct this impression?

PS: All info we received so far confirms that AGA is indeed guilty of gross intersex appropriation with serious damage done to the intersex movement and particularly to intersex children at risk of being submitted to IGM … When will intersex people finally stand up and no longer tolerate such serious harm?!