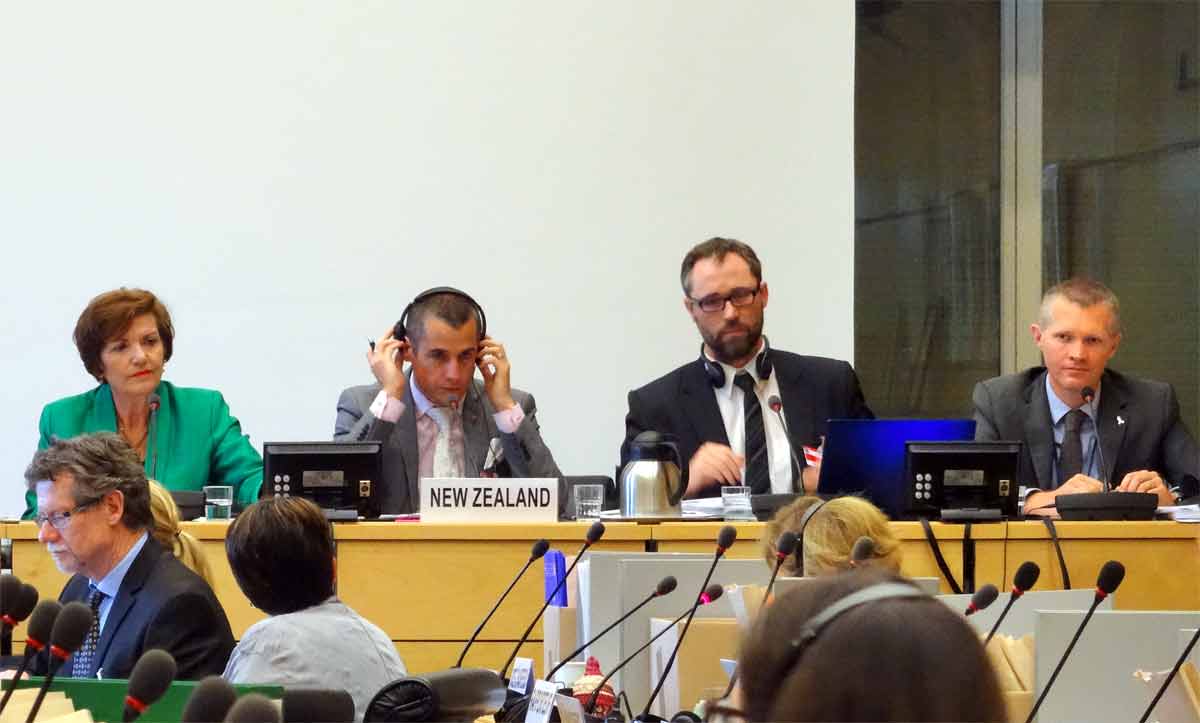 Unofficial transcriptions of all intersex relevant questions and answers plus minutes of other related items are collected below.

It’s a shame how the responsible NZ Delegation member, paediatrician (!!) Dr Patrick Tuohy, consistently and blanketly denied the ongoing IGM practices in NZ, and every time tried to shift the discussion to trans issues instead (“surgical gender assignment”). Unfortunately, this was helped by somewhat unhelpful wording in some NZ reports and by the Committee, using the euphemism “normalising surgery” instead of the usual descriptive UN language “involuntary non-urgent treatment” or “non-consensual unnecessary treatment”. Luckily, intersex advocates profited from the NZ NHRIs delegation present in Geneva (particularly the NZ Human Rights Commission) also intervening with the Committee to set the record straight and to ensure a follow-up question. Reagrding the mindset of the NZ delegation informing their flat-out denials, a few words with Dr Tuohy after the 3rd Session proved insightful (see minutes below).

17:26h: Answer on intersex children by NZ Delegate Dr Patrick Tuohy (Paediatrician, Chief Adviser, Ministry of Health, Wellington, NZ), admits no legally binding protections to prevent involuntary surgeries are in place, and at the present there are also no plans to introduce any, refers to overview of Medical Council instead … Mentions multidisciplinary network of endocrinologists and surgeons, claims all parents are given access to peer support, mentions the figure of 30 intersex children born annually … Claims no IGM practices having taken place since 2006! Consistently tries to deflect to “gender reassignment” instead – pinkwashing as per usual  🙁   Unofficial Transcription:

Anne Tolley (Head of Delegation and Minister for Social Development): « I’d like Pat Tuohy to address the question around education programs available for intersex children and their families. »

Dr Patrick Tuohy (Paediatrician, Chief Adviser, Ministry of Health, Wellington, NZ): « In respect to intersex. There was a question with three parts. The first was, do we have a legally binding system to prevent genital normalization on children? The answer is that we do not currently have a legislative framework for this, and there is no plans in place for that at the present time.

However, all New Zealand citizens are covered by the health and disability bill of rights, and all medical practitioners work under the authority of the Medical Council of New Zealand.

We have a multidisciplinary network of surgeons and endocrinologists who discuss all cases related to gender whether the [undiscernible] practices conservative treatment, which is effectively no gender reassignment, surgical gender reassignment.

We have around 30, between maybe 20 to 30 children a year. The network of surgeons and endocrinologists is confident that no medical practitioners are practicing outside of the group.

The information from hospital coding records show that no surgery has taken place in New Zealand related to gender reassignment from the time 2006.

In social support services to intersex children and their families the parents are given a chance from within the commissions involved in that network to talk to other parents and family members of children with intersex conditions and the entire family is offered peer support.

I’m not aware if we have any specific educational programs for intersex children in a formal sense, apart from that informal network that is available and I don’t know whether we have anything in the education realm for that, I think not, and we could, I’d come back with some further information tomorrow if that was required. »

10:01h: The session continues. Beforehand, I was able to talk to NZ National Human Rights Institution (NHRI) representatives (Children’s Commissioner and Human Rights Commission), and share newly received additional evidence (thank you!) of the NZ High Cost Treatment Pool to this day financing partial clitoris amputations on children with “Congenital Adrenal Hyperplasia (CAH)” oversees, which confirms the evidence presented in our Thematic NGO Report. I was informed they had also seen the evidence proving the flat-out gov denial (see transcript above) was just that, a denial, and that they would too raise this with the Committee. So we’ll have to see if there are any follow-up questions today. But even if there aren’t, we remain confident, as it’s business as usual for govs to issue full denials in treaty body reviews (often with some pinkwashing on top) – to which the Committee usually answers with yet another reprimand …

« Is there still sterilisation of children with disabilities with the parental consent?  »

10:54h: NZ Delegation member Dr Patrick Tuohy (Paediatrician, Chief Adviser, Ministry of Health) admits to cases of NZ parents going oversees to have children with disabilities sterilised, and also in NZ “after any other means had been found ineffective” (!!) Unofficial Transcription:

« With respect to sterilization of children, you are correct, the law in NZ still permits children to be sterilized with consent of their parents, if they are unable to make an informed decision, but not on the basis of age, on the basis of intellectual disability.

However, I want to point out that there is work being undertaken as part of our revised disability strategy which is a section where we’re working with disability groups within NZ to identify a process for ensuring bodily integrity of children and adults with disability, to ensure that that is addressed. And I would also point out that even though there are reports of this occurring on occasions, with the consent of the parents and there is one recent case of about seven, eight years ago, which the parents went overseas for the initiation of the program as it was not able to be done in NZ. Most clinicians were undertaking sterilization for example of a young woman would use that as a last resort, when every other method of managing instruction [?] or some other issue had been tried and found to be ineffective. »

16:24h: NZ Delegation member Dr Patrick Tuohy (Paediatrician, Chief Adviser, Ministry of Health) (non-)answers the follow-up question on intersex children, basically repeating and embellishing his earlier flat-out denial: Claims IGM to be a thing of the past, with ealier shortcomings “effectively addressed” in the meantime and today the surgeons and endocrinologists would treat intersex children “non-operatively” unless absolutely medically necessary, claims there was no record immediately available for treatments oversees, again “misunderstanding” the actual question by consistently referring to “gender assignment surgeries” – how typical is that?! 🙁 Unofficial Transcription:

Anne Tolley (Head of Delegation and Minister for Social Development): « I’m going to ask Dr Pat Tuohy to just talk about intersex children and the funding, the questions around funding for outside of NZ, where the funds come from and the number. »

Dr Patrick Tuohy (Paediatrician, Chief Adviser, Ministry of Health, Wellington, NZ): « [Undiscernible] Minister, and I believe this was your question. NZ is of course aware of that historically there had been cases of early gender assignment, as was the current medical approach some decades ago.

But health officials are not aware of any incidence of this in recent years. As the Committee will be aware there has been a significant change in medical best practice consensus in this area over the last five to ten years in many countries including New Zealand. The current international and New Zealand consensus is that all none non-essential treatment in children with disorders of sexual development, which is the preferred name rather than intersex, should wait until the person with the DSD condition is older and can consent. When this cannot be the case, when an urgent surgery might need to be required, decisions about surgery made by the parents and extended family in consultation with medical doctors involved. Now, New Zealand does not have a legal or regular [undiscernible] framework in place for gender assignment surgery for children with DSD, as we believe that our results demonstrate that we have effectively addressed this issue through the processes that we have in place.

New Zealand has a multidisciplinary network of surgeons and endocrinologists who discuss all cases in which there may be concerns about a child’s gender, in accordance with international best practice the default practice is non-operative support that [undiscernible] network of endocrinologists and surgeons are confident that no medical practitioners in NZ are working in isolation.

They are aware of and support the evidence based guidelines described in the internationally supported clinical guidelines for the management of disorders of sex development in childhood. As these specialists are also the referring and ongoing clinicians involved in the care of children and maintain this responsibility in respect [undiscernible] to a centre within New Zealand or oversees.

Gender reassignment surgery for adults is covered by the provisions of the High-Cost Treatment Pool which is administered by the Ministry of health. Gender reassignment medical treatment, predominantly hormone treatment, is available in New Zealand through the district health boards, and if surgery is [undiscernible] in this context any state’s support through the High-Cost Treatment Poool is limited to people over the age of 18 years who are actively seeking the surgery.

I’m not aware whether any children or adolescents under the age of 18 have received funding for the High-Cost Treatment Pool for genital surgery oversees related to DSD. It may be possible to determine this, but review of individual files may be required, and that could take some time. So while we could [undiscernible] team to get that back to you I suspect that going through the files would take more than a few days – over a weekend. OK. »

After the Session: I spoke briefly to Dr Patrick Tuohy, making sure he got a copy of our thematic NGO report (which he said he had studied in advance), though it was somewhat of a challenge getting a word or two in inbetween. Dr Tuohy’s standpoint was that there wasn’t sufficient proof of IGM practices still taking place, as “hypospadias repair” from his point of view wouldn’t count, and the sources given for NZ children operated on in Australia (from 2013 and 2009) were too old to contradict his claim that surgery had stopped (latest in 2006). He further argued he had studied the framework of harmful practices and found that it was not applicable to IGM practices anyway, as from his viewpoint intersex surgeries wouldn’t fit the definitions stipulated therein (apparently despite stating he had studied our NGO report he seemed unaware that over the last 2 years, CRC has so far found IGM practices to constitute a harmful practice 6 times).

« 1. Has the High Cost Treatment Pool in the Ministry of Health previously funded genital surgery for intersex infants, provided at the Royal Children’s Hospital in Melbourne?

We have previously stated that there has been no surgery related to gender assignment in New Zealand since 2006. This statement was based on what now appears to be an incomplete review of hospital coding records. The Ministry of Health has undertaken a more detailed search and we would like to draw the committee’s attention to the following updated information on this issue.

Until 2007, the High Cost Treatment Pool in the Ministry of Health funded genital surgery for intersex infants, provided at the Royal Children’s Hospital in Melbourne.. Between 1999 and 2007, the High Cost Treatment Pool funded treatment for 15 girls with congenital adrenal hyperplasia, for genital feminisation. The Royal Children’s Hospital then stopped providing this treatment.