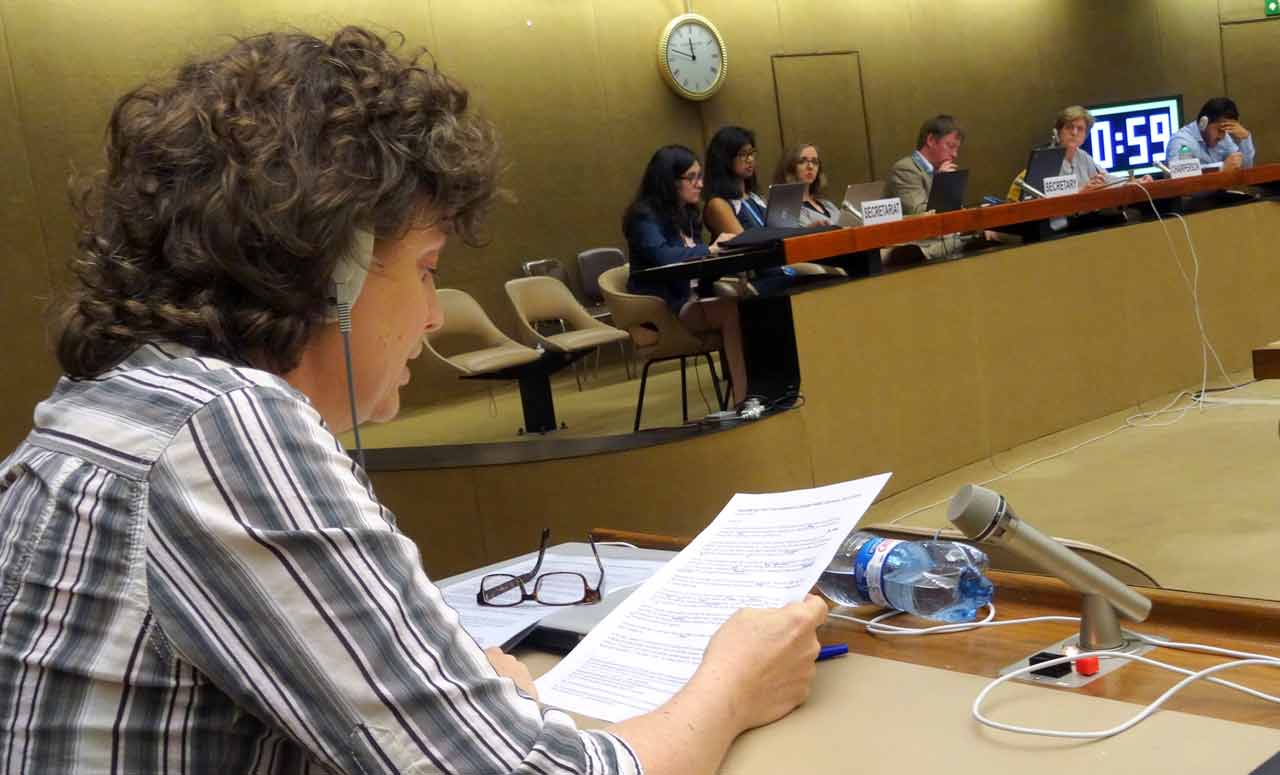 Photo: Daniela Truffer (StopIGM.org) briefs the Committee on the Elimination of Discrimination against Women (CEDAW) on IGM practices in Germany for the upcoming 66th session, Geneva 25.07.2016

StopIGM.org and French intersex advocates Nadine Coquet and Vincent Guillot warmly welcome the historic ‘Concluding Observations’ of the UN Committee on the Elimination of Discrimination against Women (CEDAW) reprimanding France for Intersex Genital Mutilations (IGM), marking
•  the very 1st time that CEDAW condemns IGM as a “harmful practice” (just like FGM),
•  the 3rd UN reprimand for France for IGM practices in less than one year,
•  already the 15th UN reprimand for IGM practices so far.

We particularly appreciate that in its binding recommendations issued on occasion of the 64th Session, CEDAW explicitly obliged France to “[ensure that] no child is subjected to unnecessary surgery or treatment“ (referring to the earlier verdicts by both CRC and CAT), as well as to “systematically collect disaggregated data on harmful practices in the State party and make information on the ways to combat these practices widely available” – both long-standing demands of intersex NGOs.

A thematic NGO report to CEDAW (PDF) by StopIGM.org, Nadine Coquet and Vincent Guillot provided incriminating evidence of all forms of IGM remaining pervasive in France, advocated by the public medical body “High Authority of Health” prescribing e.g. partial clitoris amputation on intersex children “during the first months of life”, paid for by the public health insurance, and perpetrated in public university and regional children’s clinics with impunity.

“To this day in France there is no law to protect intersex children from these daily mutilations. The French Government refuses to acknowledge that this is a human rights issue, but frames IGM as ‘complex medical questions’ best left to the ‘medical expertise’ of the perpetrators, who in turn blanketly dismiss human rights criticism as, I quote, ‘unfair’ and ‘counterproductive’.”

2.  Next in line: Switzerland and Germany

The next State party up for review of Intersex Genital Mutilations by the UN Women’s Rights Committee (CEDAW) is Switzerland during the 65th session in October 2016. Like France, also Switzerland has previously been remanded for IGM by both the Committee on the Rights of the Child (CRC) and the Committee against Torture (CAT).

Germany follows during the 66th session in February 2017, having previously been reprimanded by the Committee against Torture (CAT) and the Committee on the Rights of People with Disabilities (CRPD). What’s more, in 2009 CEDAW was the first UN treaty body ever to include a recommendation on intersex people in its Concluding Observations for Germany.

For both Switzerland and Germany, CEDAW has already received (or will shortly receive) conclusive thematic NGO reports as well as further incriminating evidence of IGM practices. StopIGM.org is again expecting stern reprimands.

Since 1950, IGM has been practised systematically and on an industrial scale allover the ‘developed world’, with all typical IGM forms still practised today. Parents and children are misinformed, kept in the dark, sworn to secrecy, kept isolated and denied appropriate support.

For more than 20 years, survivors have criticised IGM practices as harmful and traumatising, as a fundamental human rights violation, as a form of genital mutilation and child sexual abuse, as torture or ill-treatment, and called for legislation to end it and to ensure remedies, including access to justice and adequate compensation.

The UN Committee on the Rights of the Child (CRC) has repeatedly considered involuntary, non-urgent intersex treatments as ‘violence’ and a ‘harmful practice’, and thus comparable to Female Genital Mutilation, and since 2015 has reprimanded Switzerland, Chile, Ireland, France, the UK and Nepal for failing to protect intersex children’s right to bodily integrity and to ensure equal access to remedies and justice for victims.

The UN Committee against Torture (CAT) likewise recognises IGM practices as constituting at least ‘inhuman treatment’ in violation of the Convention against Torture, and since 2011 has reprimanded Germany, Switzerland, Austria, Denmark, Hong Kong and France, explicitly calling for investigation of cases of IGM, redress for survivors and legal prohibition of the practice.

The UN Committee on the Rights of Persons with Disabilities (CRPD) also considers IGM as ‘inhuman treatment’ and since 2015 has reprimanded Germany and Chile, echoing CAT and further denouncing violation of the right to autonomy and self-determination.

The UN Committee on the Elimination of Discrimination against Women (CEDAW) now reprimanding France, again denouncing IGM as a “harmful practice” (just like FGM) and referring both to CRC and CAT, is already the fourth UN treaty body recognising IGM as a fundamental human rights violation.

In all above 15 verdicts, the Committees issued binding recommendations to take legislative action to end the practice and to ensure access to redress and justice for IGM survivors.

Other international human rights bodies to condemn IGM practices so far include WHO, UNICEF, the UN Special Rapporteur on Torture, the Council of Europe (CoE) and the Inter-American Commission on Human Rights (IACHR).

To this day, Malta and Colombia are the only countries to at least formally outlaw or partly ban involuntary surgeries on children with ‘atypical genitalia’, although without any tangible consequences for perpetrators and without ensuring access to redress and justice for survivors of infant IGM practices by prolonging the statutes of limitations long enough to allow often traumatised survivors to sue as adults.

States as contracting parties to the Convention on the Rights of the Child (CRC), the Convention against Torture (CAT) and other applicable Covenants including CEDAW, CRPD and CCPR can no longer feign ignorance of the illegal nature of IGM practices, but must take all appropriate measures including legislation to eliminate them, and to guarantee access to effective redress and justice for all IGM survivors!

The international intersex human rights NGO StopIGM.org and French intersex advocates Nadine Coquet and Vincent Guillot demand the prohibition of forced genital surgeries on children and adolescents with Variations of Sex Anatomy and “Human Rights for Hermaphrodites too!”