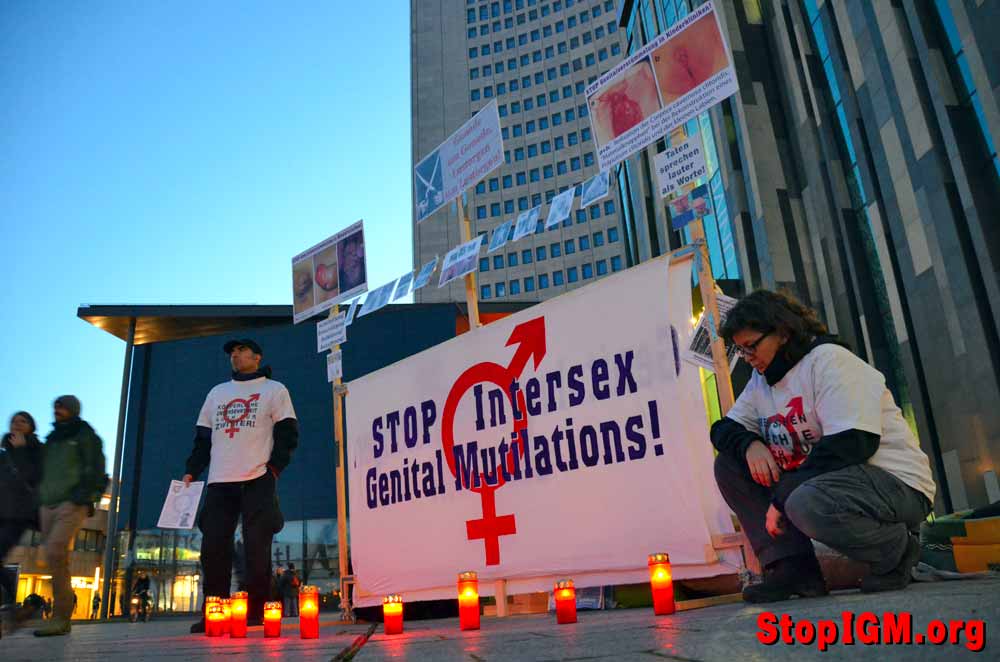 This is arguably the 1st time ever an elected parliament explicitly refers to Intersex Genital Mutilations (IGM) and – together with FGM (!) – unmistakably urges “to prevent, ban and prosecute” !

From this blog a heartfelt thank-you to everybody involved!

The following are the relevant paagraphs of the Resolution 2016/2096(INI) on FGM and IGM (additional paras addressing intersex see below):

BB.  whereas women and girls who are subjected to female genital mutilation are exposed to serious short- and long-term effects on their physical, psychological, sexual and reproductive health;

BC.  whereas intersex persons subject to genital mutilation also experience effects on their physical, psychological and sexual and reproductive health;

61.  Calls on the Member States to prevent, ban and prosecute female genital mutilation and genital mutilation affecting intersex persons, and to provide mental health support, in conjunction with physical care, to victims and to those individuals likely to be targeted;
[…]”

(This EU Resolution initiated by the Committee on Women’s Rights and Gender Equality (FEMME) is in line with the Resolution of the German 24th Conference of Ministers for Women’s Issues and Equality (GFMK) which in 2014 also explicitly called for a “legal ban of medically unnecessary surgical and pharmacological […] interventions on intersex minors,” explicitly referring to the need of intersex children for similar protection against sterilisation (§ 1631c BGB) and female genital mutilation (§ 226a StGB) that other children and girls already enjoy, but intersex children don’t (see >>> 2015 CRPD Intersex NGO Report (PDF), p. 19).

In addition, the Resolution 2016/2096(INI) of the European Parliament further addresses intersex people also in its paras on forced sterilisation, intersectional discrimination and specific mental health issues, again calling to prevent, ban and prosecute or to develop specific prevention strategies and to ensure acces to mental health services respectively. The following are the relevant paragraphs of the Resolution 2016/2096(INI) on these issues:

M.  whereas in particular lesbian and bisexual women, as well as transgender and intersex persons, face specific mental health issues arising from minority stress, defined as the high levels of anxiety and stress caused by prejudice, stigmatisation and experience of discrimination, as well as medicalisation and pathologisation; whereas LGBTI people may face specific mental health and wellbeing challenges which must be taken into account in any mental health strategy;

AG.  […]; whereas there is a lack of research on the specific needs of intersex women;

20.  Calls on the Commission, the Member States and local authorities to develop specific tailored policies in order to provide mental health services to groups of vulnerable women in marginalised communities and to those facing intersectional discrimination, such as refugee and migrant women, women facing poverty and social exclusion, intersex and transgender persons, ethnic minority women, women with disabilities, older women, and women in rural areas;

41.  Calls on the Commission and the Member States:
[…]
(c)     to ensure that prevention strategies specifically target women who are at risk of intersectional discrimination such as Roma women, women with disabilities, lesbians and bisexual women, migrants and women refugees and women living in poverty, as well as transgender and intersex people;

47.  Calls on the Member States to prevent, ban and prosecute the forced sterilisation of women, a phenomenon that affects in particular women with disabilities, transgender and intersex persons, and Roma women;

These are wonderful news from the EU Parliament! However, one questions remains: Considering that the EU ist still the world’s largest funder of Intersex Genital Mutilation, how long will it take until this ground-breaking Resolution will be implemented by the member states?! To be continued …

(Thanks to Benjamin Moron-Puech for the tip!)